Home | About Us | Daniel Alpena 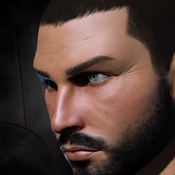 Daniel joined the Intaki Liberation Front on January 14, YC114. An active combat pilot, he was promoted to Isha-Sainika on July 19, YC115. 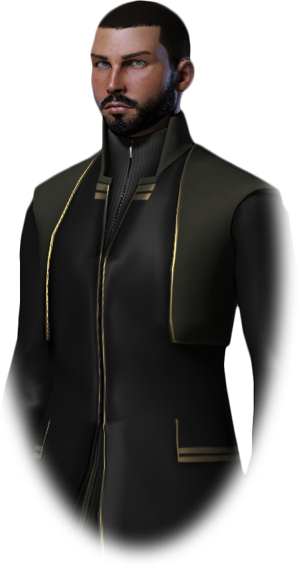 Daniel was born and raised on Gallareue IV, a small, low-gravity planet in the Jonenor constellation of Sinq Laison. Named “Jewel” by the locals, the planet is temperate and beautiful, but the low air pressure means that the human population lives entirely within pressurized domes. Daniel’s family owns a number of food production facilities. They operate huge algae and kelp farms, owning a number of robotic harvesters as well as processing centers. Despite growing up on a temperate world, Daniel spent nearly all of his time inside the domes, helping to maintain the harvesting and production machines.

From the beginning, Daniel had difficulty relating to his fellow humans on Jewel. He was a shy and bookish child. During his teenage years he found it difficult to make friends, and after a few bad experiences he stopped trying. He found little interest in the things that his peers enjoyed, and even within his own family he became quiet and withdrawn. In his darker moments he began to wonder if he was some sort of changeling; a member of another species, unaccountably left to mingle with humanity.

When the new cloning technology suddenly arrived, it seemed to Daniel that he had found his destiny. He immediately signed up for testing, and was not surprised to learn that he was one of the very few individuals suited for the capsuleer lifestyle.

In the capsuleer program at Federal Navy Academy, Daniel for the first time was exposed to other races and cultures, including the Intaki. After graduation he used his new resources to explore and learn more about the various cultures of New Eden. Ironically, he realized that he was developing a connection to the human race after he had (in his mind) left it. This new rapport with baseliner humanity became strongest when he visited the Intaki system, and experienced the quiet strength and resilience of the Intaki people on their homeworld.

Daniel admires the people of Intaki, though he doesn’t entirely understand them or their religion. He believes that the “backwater” status of the Intaki region is a deliberate ploy on the part of the Gallente Federation, to lure the young and ambitious among the Intaki away from their homeworld and into Federal service elsewhere.

For now, Daniel is occupied with improving the combat capability of the Intaki Liberation Front. In the very long term, he’s thinking of starting an anti-pirate combat corporation.

Daniel still has difficulty with personal relationships. He’s more comfortable speaking to a crowd of hundreds than sitting down for a private conversation with one person. He tries to keep all his relationships on a strictly professional basis, often maintaining a forced formality because he’s always worried about unintentionally giving offense. In public, he’s usually viewed as something of a cold fish, keeping to himself and maintaining a stern countenance. When drawn out, however, he can be surprisingly articulate.

Physically, Daniel is on the small side, standing at about 175cm, with a compact, stocky frame.

Daniel’s biggest fear is that he’ll follow the path of other capsuleers who have begun to consider themselves as gods and forget or ignore the problems of baseliner humanity. He now worries about his original motives for becoming a capsuleer, and tries to maintain a connection to the human race.

Daniel never wants to meet a person who believes himself too evil or damaged to be redeemed. He would consider it a form of moral cowardice, or an excuse for atrocious acts.