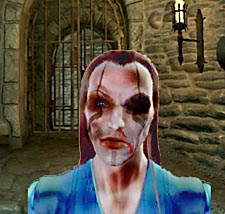 The Eve Observer has received confirmation that, for the time being, missing Intaki Liberation Front CEO Saxon Hawke is alive and did survive an explosion that destroyed his home three weeks ago.

This reporter received an unmarked package containing a time-stamped video and a sample of genetic material that was an exact DNA match to Saxon Hawke. In the short video Mr. Hawke makes the following statement:

“My name is Saxon Xavier Hawke and I give this testimony of my own free will. I am a criminal and hereby confess to the murder of 100,000 crewman who died aboard Serpentis-owned vessels destroyed while conducting peaceful business activities in the Placid Region.

“I also waive all requests for trial or appeal and submit myself to the punishment of death. It is my deepest regret that I can only die once for crimes.”

Initial forensic investigation indicates the video, shot January 12, is authentic and unaltered. As can be seen in the video still accompanying this article, Mr. Hawke does appear to have suffered injuries.

According to Simone Prideux, a woman claiming to represent the Serpentis Corporation, Mr. Hawke was abducted by a third party and delivered to the Serpentis operatives for an undisclosed, but substantial, amount of isk.

The source also revealed that Mr. Hawke was scheduled to be executed by a lethal overdose of narcotics in the early morning hours of January 18.

Further developments in this story can be found here.