Home | About Us | Saxon Hawke 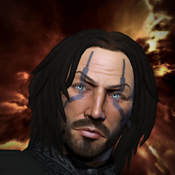 Saxon founded the Intaki Liberation Front on December 22, YC108 and was Suresha until June 19, YC115. He now acts as an adviser to ILF leadership. 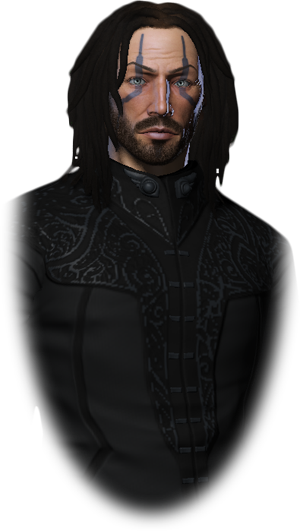 Saxon Hawke was born in the late YC60s aboard a station located in the Intaki Syndicate. His grandfather, a reborn Intaki, was one of the original 5,000 Intaki exiles and a political agitator. His parents, however, were artists not interested in political matters. Despite the influences this had on his upbringing, Saxon had hoped to be a major league kendu player and put years of effort into practicing the sport. Although dedicated, unfortunately he never rose to the level of a pro athlete and decided instead to take work as a crewman aboard a transport freighter to travel the cluster.

Birthing the Secessionist Cause

After working aboard various vessels for several years, Saxon had accumulated some wealth but he wanted more to provide for his growing family. When an opportunity to become a capsuleer became available from the Federation Navy Academy, he jumped at the chance.

After completing his training, Saxon took employment first with Serenity Mining Inc. and then Black Viper Corp to obtain practical experience. But, during a visit to Intaki his ship was attacked by pirates and all hands were lost. This event was the catalyst that set Saxon searching for a group that could help restore order and prosperity to Intaki space. Later, after being unable to find such an organization, Saxon opted instead to form his own and founded the Intaki Liberation Front on December 22, YC108, falling quickly into the role of political activist.

“It was blatantly apparent to me that the Federation had no true interest in the Intaki system,” Saxon says. “At times even the Caldari have appeared to have more concern about the plight of Intaki than its own government. It made it easy to see why my grandfather made the choice he did those many years ago.” Saxon pledged to create an organization that could fight for the security and prosperity of all people who live and work in Intaki space, with the ultimate goal to achieve independence for the Intaki system and its various colonies.

On January 31, YC112 ILF became the executor corporation for the Intaki Liberation Front alliance under Saxon’s leadership. In the ensuing years, he spent much of his time lobbying the Federation Senate regarding Intaki and raising public awareness of issues surrounding the low-security system.

“Tanmaya Hawke is a preeminent figure within the Intaki independence movement,” says Bataav, a veteran member of ILF. “He was an inspirational leader, and did not focus on what is, but what ought to be. It is in this spirit that our vision and motivation for peaceful secession has grown.”

After six years in the fight, however, Saxon grew weary and passed his responsibilities on to those with more energy. He currently resides at the Intaki Cultural Center, serving as an adviser to ILF leadership and giving impromptu lectures in the gardens.

Saxon is known to be a reasonable man, but once his mind is set, it is very difficult to get him to change it. In addition, he can be something of a control freak, believing that for something to be done right, he must do it himself. Friends say that while he is generally reserved, he can be quite funny in private settings and is loyal to a fault. He is also a firm believer in the Intaki rebirth, but feels that one needn’t necessarily die to be reborn.

He feels that the sacrifices he has made and the service he has rendered to Intaki and its inhabitants has paid any debt he owed to society. At one point he felt like he was single-handedly carrying the torch for Intaki independence, but is thankful that the movement has grown and he can now enjoy the life of a philosopher.

Saxon loves to travel and has friends on every colony in the Intaki sovereignty. If asked, he would say that he has enjoyed too many places to pick a single favorite. However, truth be told, his favorite spot on any world is the Kendu pitch.