Home | About Us | Erun Talan

12 May YC116 Intaki Liberation Front
About Us 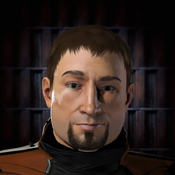 Erun joined the Intaki Liberation Front on February 14, YC115. He contributes both as a manufacturer and as a combat pilot. On October 8, YC117, Erun was promoted to Isha-Dravya.

Erun Talan grew up in the Obray constellation of the Verge Vendor region. Much of his youth was spent moving from one station to another as his parents went about their work as artists. His father was a master metalsmith known for filigreeing his pieces with traditional Intaki designs, while his mother focused on fine embroidery depicting vivid scenes of natural settings.

Despite this frequent relocation, Erun excelled at his studies, particularly in subjects relating to his interests: history, electronics, and artificial intelligence. He also found time for various “extra-curricular” activities, some of which eventually caught the attention of the authorities. After one particular “accident”, Erun found himself recommended to the University of Caille where he was screened to be a capsuleer.

Standing 185cm (6’1″) tall and weighing 130kg (287lbs), Erun has an imposing figure that appears at odds with his personality. “I’m rather large for a capsuleer,” he says, “but most who meet me find me to be more a gentle giant than a violent one.” He credits his memory and intelligence for getting him into the advanced drone programs at the University of Caille but considers his interpersonal skills to be poor. “I don’t tend to make a lot of friendships but I do guard them furiously.”

Erun is noted by his peers to have a smile on his face most of the time and that he can be counted on to be a sober and steadying presence in serious situations. He has been decorated several times over the course of his career by various corporations. “Erun gives his time and energy freely to others,” Suresha Eionell says. “The Intaki Liberation Front is lucky to have him.”

In his travels and whilst working for the Sisters of EVE he was exposed to the religious customs of many New Eden cultures but found that none particularly appealed to him, so he has no religious philosophy per se. “I find myself of the mind that each person creates their own spirituality, whether it’s from external sources, or drawn from their own experiences with the things they can’t explain,” he says. “Since one of my goals in life is to take away those nooks and crannies where the unexplained tries to hide, my own religious views would seem blasphemous to many of the devout.”

Erun jumped on the opportunity to become a capsuleer, seeing it as a way to capitalize on his love of knowledge. People, places, cultures, phenomena: all interested him to some degree, and becoming a capsuleer gave him access to information and technology which allowed his mind to grow nearly without limit.

After experiencing what he terms “the soul-draining grind of null security sovereignty warfare”, in YC115 Erun joined the Intaki Liberation Front. “I was looking for a place where I could find people who wouldn’t just treat me like another cog in the machine,” he says. “ILF had caught my eye early in my career, but I never really thought of joining until after my experience in nullsec.” These days, Erun contributes to ILF’s cause by providing much-needed materials and supplies as well as patrolling the systems in and around the Intaki sovereignty to destroy Serpentis vessels and other pirates that infest the Placid region.

Being a capsuleer with positive security status means Erun can travel freely around New Eden to see its various sights and sounds, but even so, there’s no place like home. “Obviously I spend a lot of time on and around Intaki Prime, and my favorite spot there is the research greenhouses built by ILF pilot Bu Imbagi, where I like to relax and meditate outside of the hydrostatic fluid of my capsule.”

Erun’s main goal is to help the people around him. “The pilots of ILF have proven to be engaging compatriots to an eccentric loner like me, never pushing me to do anything,” he says, “but providing a framework in which I can service the cause to the best of my abilities.” He also continues his pursuit of knowledge. “I want to unravel the mysteries of this beautiful universe we find ourselves in, as well as the people and entities that inhabit it.”

As a capsuleer, Erun’s work brings him up against numerous pirates and other unsavory individuals who operate on the far side of the law. Despite this constant exposure to the criminal element of New Eden, he believes people can redeem themselves. “They just need to be given appropriate incentive and the helping hands of those who care for them. The only ones I think can’t be redeemed are those who don’t want to, and those without a proper support system.”

Erun believes responsibility is something capsuleers have in varying amounts. “Some of us have a great deal of responsibility, leading vast alliances and corporations into titanic conflicts. Others are only responsible for themselves and the few people who come under their purview by virtue of necessity.” He takes the safety of those under his employ very seriously, whether they are in space managing the continued functioning of his ships, or planetside managing his horticultural or industrial interests. “For the ones in space, their very lives are in my hands, and I feel great sorrow every time one of my ships is destroyed, because I know it isn’t just me that has suffered a loss…”