To Our Valued Allies and Friends:

Recently, the Intaki Liberation Front initiated a brand audit. One of the key findings to emerge was that our corporation logo did not adequately reflect who we are today – leaders in promoting a free and independent Intaki sovereignty that preserves and celebrates Intaki culture, with a reputation for resiliency, dedication, and goodwill.

With this in mind, we embarked on updating our image. I am pleased to unveil the Intaki Liberation Front’s new logo:

I am excited to bring two announcements to you today.

First, this evening the Intaki Liberation Front has rolled out a new corporation logo. This rebrand has been done to give our corporation a more recognizable and meaningful identity. The new logo contains symbolism representative of our roleplay, and “Intaki red” and gold (with black) are now the official corp colors.

Many separatists and anti-federalists have spoken on the Intaki system’s low security status as unjust or insulting. However, the true weight of this situation seems clouded by this rhetoric. For Empire Space (that is: space under the direct control and defense of the four major nations or CONCORD), a 0.1 security status is the lowest possible rating for CONCORD jurisdiction without the system becoming completely lawless and unclaimed. Usually such a status merely restricts contraband cargo (namely slaves) but customs vessels will only apprehend customs violators and do not police the area.

Star Fraction on the Intaki Question

In recent years, the question of the Intaki people and their future has become ever more pointed a source of dispute and conflict. This is doubly so as the Gallente Federation has become ever more paternalistic yet neglectful, while the ranks of the capsuleer class have swelled with Intaki and others who support them. The Star Fraction, and before its formation Jericho Fraction, has long been sympathetic to the aspirations of those Intaki who would see their people on the path of self-determination. In part, this is due to the many Intaki in our movement who hold the future of their people to lie in freedom at home and amongst the stars. Yet it is mainly a function of the ideology of the Fraction, which holds self-determination to be an essential that must be observed and upheld in any association or society in which all may flourish. Even so, we are from time-to-time asked what our position on the Intaki Question is and recently a number of interested parties have made inquiries in this vein.

This post is meant for capsuleers and baseliners alike, and many baseliners will likely find it more useful than those in the capsuleer class, whose liberty and freedom are for now ensured by the technological supremacy we represent.

The great powers of the President, connected with his governance by favorites and flatterers, are a cause for concern to all who would wish to live freely in the cluster. A dangerous council is collected from the great officers of state and the Ladistier system, if the remarks of one of the wisest men, drawn from the experience of mankind, may be credited, is the asylum of the base, idle, avaricious and ambitious.

The president cannot represent you because he is not of your own immediate choice. In adopting his government, you will incline to an arbitrary and odious aristocracy.

The most common mistake any pilot can make on their first trip into low-security space is to vastly underestimate the risk involved. An equally large number of people set out believing the polar opposite: that a trip into lowsec might be tantamount to suicide! 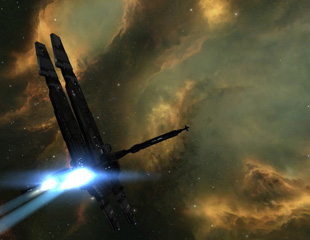 The truth is, lowsec is dangerous—other capsuleers will actively hunt you, and you need to keep your wits about you at all times—however, with some simple precautions even new pilots can enjoy the excitement of lowsec life. In this article I’ll explain the basics of how to survive and thrive in this hostile environment.

In the Name of the Federation

The Gallente Federation was built upon the political cornerstones of promises and hope. Promises of equality, liberty and justice; and hope that the Federation can fulfill these lofty goals. It cannot fulfill these goals, and the proof lies in the Intaki. Most outside and even inside the Federation are unaware of any details of Intaki other than broad and inaccurate assumptions. These assumptions, combined with a Gallente ethnocentric state apparatus, create a complicated system of repression for the Intaki residents of the Gallente Federation.

Failure of the Federation

The recital, or premises on which the Gallente Federation is erected, declares a consolidation or union of all the its varied parts, or star systems, into one great whole, under the form of a federation, for all the various and important purposes therein set forth. But whoever seriously considers the immense extent of territory comprehended within the limits of the Federation, together with the variety of its climates, productions and commerce, the difference of extent, and number of inhabitants in all; the dissimilitude of interest, morals, and politics, in almost every one, will receive it as an intuitive truth, that a consolidated republican form of government therein, can never form a perfect union, establish justice, insure domestic tranquility, promote the general welfare, and secure the blessings of liberty to you and your posterity, for to these objects it must be directed. This unkindred legislature therefore, composed of interests opposite and dissimilar in their nature, will in its exercise, emphatically be like a house divided against itself.

It is becoming obvious that we, the Intaki, are becoming strangers in the Gallente Federation. Many of us have been integrated by our benevolent imperialist conquerors and have reaped the benefits of life in the Federation. We are included in their culture at least as far as inclusion means that we are blended into a greater Federation determined by the cultural, political and social needs of Gallente. As Intaki, we have two choices: submit to the Gallente hegemony and assume an identity that is not our own (and is therefore fundamentally alienating), or refuse integration altogether and therefore live with the alienation of an imposed Gallente sociopolitical superstructure. Those of us that have refused to be integrated, especially historically, are therefore outcasts or exiles.